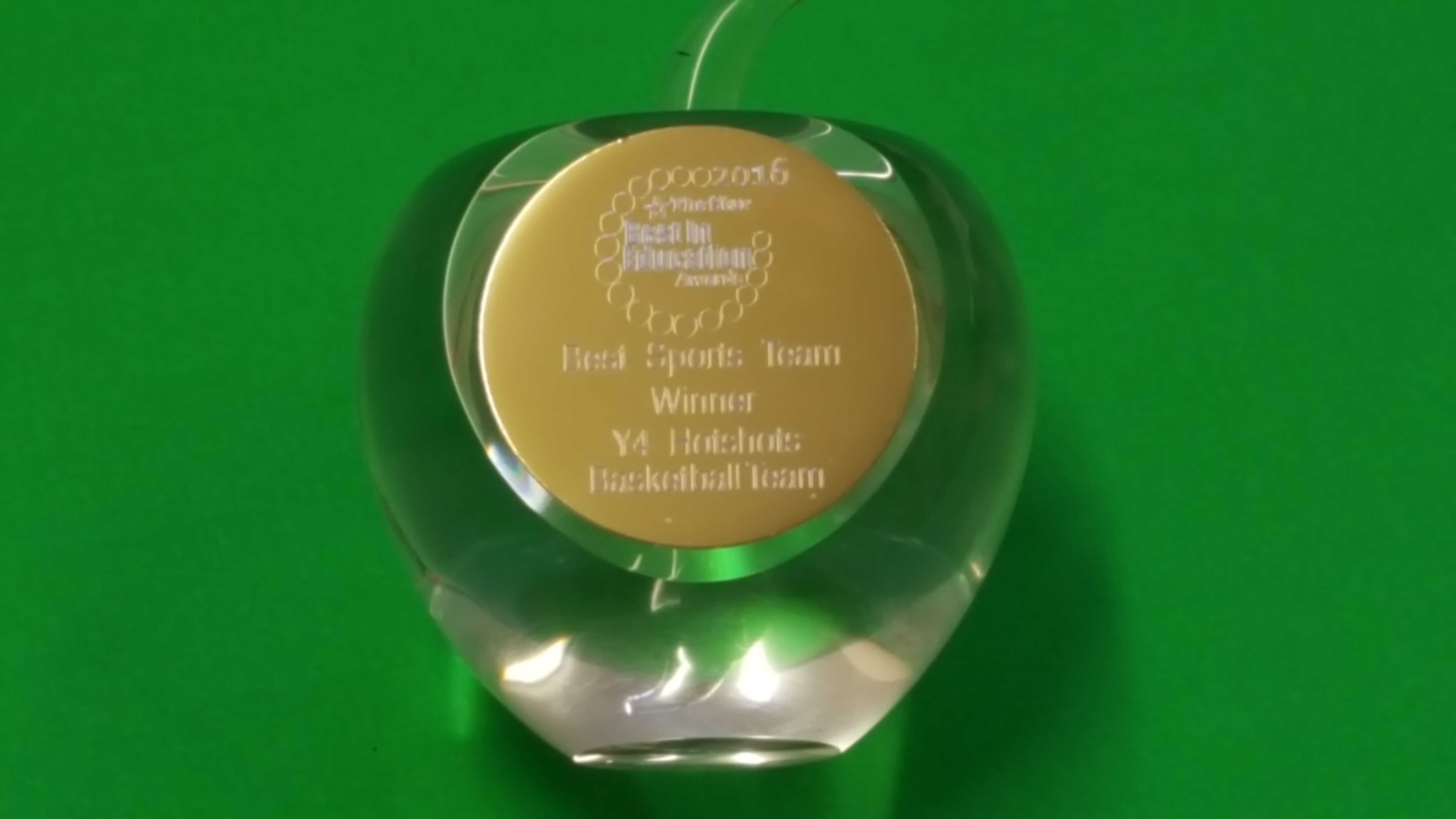 I am delighted to advise you that our Y4 Hotshots Basketball team (who were all conquering last year) have been awarded the Sheffield Star Education Awards trophy for Best Primary School Sports Team in Sheffield .

We received the award at a ceremony held at Kenwood Hall on Monday evening.The event was hosted by our very own Andrew Truby.

This is a real honour as this is the first time ever that St Wilfrid’s have received such recognition.

I am delighted that several of the team have been inspired to continue playing basketball. Indeed several of the girls are now members of Sheffield Hatters Basketball Club. 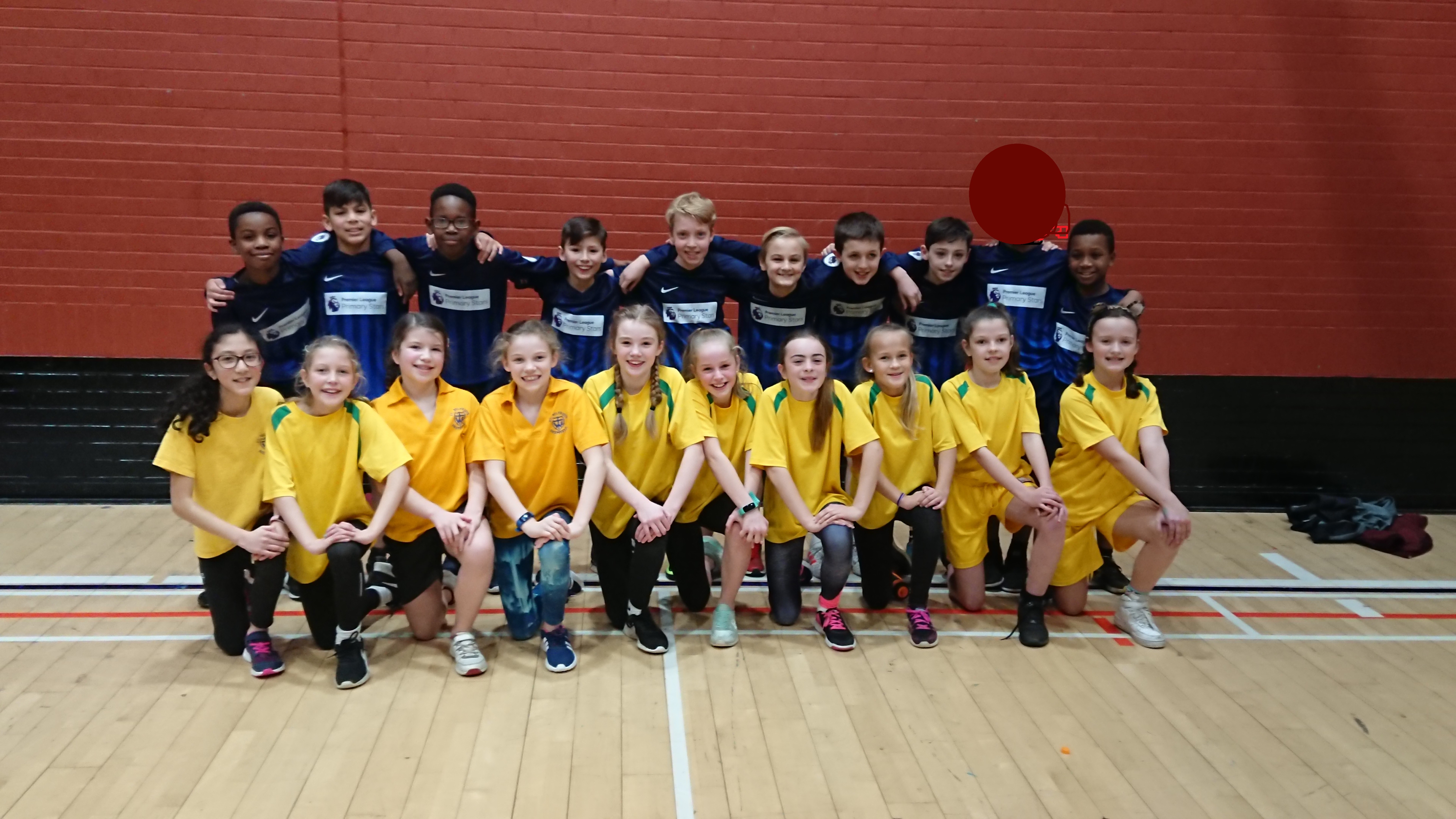 I’m thrilled to announce that our y5/6 Sportshall athletics team were winners in the Sheffield City finals held on Tuesday at Concorde sports centre.

There were many impressive performances throughout,  particularly in the running events.

For some of the children this is the first time they have competed in such an event but they gave it everything.

At the end of the competition the officials and other school representatives commented how talented and determined our children were.

This is the third time that St Wilfrid’s has been successful at this stage of the competition, a fantastic achievement considering the number of schools entering the event.

It was lovely to see so many happy smiling faces and the team  treated us to a  ‘sing song ‘ on the minibus on our way back!!

They will now represent Sheffield together with Nether Green ( who were runners up) against the top 6  schools from Doncaster, Rotherham and Barnsley in the regional finals to be held at the English Institute of Sport in March.

Many thanks to the parents who offered their support along with Mrs Pearson who accompanied us on her day off.

A fantastic display by all the children who took part in the Sheffield City finals of Sportshall Athletics at Hillsborough Leisure Centre on Wednesday afternoon.

The team, made up of 10 boys and 10 girls  from the y4,y5 and y6 age groups, competed against seven other schools from other areas of Sheffield .These included Greenhill, Lydgate, Marlcliffe, and Hunters Bar.

I have to say that we’ve been doing his event for quite a few years now and this is the smallest team we have ever assembled. !! ( in stature but not in heart)

The event consisted of various running events including sprints, hurdles and relays combined with field events such as long jump, speed jump and ball throw

From the outset it was obvious that St Wilfrids were in confident mood. Leo ran really well in the sprint to claim 2nd place and 7 points.

Luka and Ted followed with 4th and 2nd respectively in the 2 lap sprint and hurdles. Louis then stormed to our first win with a brilliant run  in the 2 lap hurdles.

Little James who is only a y4 teamed up with Ted in the 6 lap relay and gained a creditable 5th place .

Two photo finish 2nd places in the hurdle and obstacle relay races by Sam, Louis, Jem,  Jack and Tom meant the boys had put us up with the leaders. In the field events some top performances by the girls in the standing long jump, speed bounce and target throw ensured St Wilfrids were near the top of the leaderboard.

Half time and the boys were now doing the field events and the girls the running races.

Cheered on by Mr Brelsford and quite a few parents, the girls excelled themselves in the track events.

After a nervy start with a 5th from Dera and an 8th from Tatiana the girls began to shine.

The funniest sight of the day was seeing Katie (4 foot nothing) lining up against a girl in the next lane who was almost double her height!!!

Juliette ran a close 3rd in the 1 lap hurdles, Zena ran strongly to finish 2nd in the 2 lap hurdles and teamed up with Maggie to win the 6 lap hurdles by a distance.

Another win followed in the hurdles relay with Sophie, Katie, Aine and Rebecca( also a y4) showing great guts and determination.

Two more 2nd places in the Sprint and Obstacle relays ( Annie ,Aine, Katie, Tatiana and Juliette) ensured that we up with the leaders.

The boys made an almighty effort in the field events with impressive performances in the long jump, target throw, chest push and speed bounce .

The final event was the mixed relay ….2 boys (Louis and Leo) and 2 girls(Dera and Maggie) 1 lap sprint………. the children gave it their all and stormed to victory .

The children from all  8 schools were asked to come together to hear the results announced in reverse order.

After a nail biting wait it was declared that Greenhill Primary were in second place with 139 points. This could only mean that St Wilfrids , with a total of 152 points, were now Sheffield City Sportshall Champions 2015!

We will now progress to the Sainsburys School Games Sportshall  Regional finals at the EIS on March 18th .

Many thanks to all the parents who assisted on the day or offered their considerable vocal support!